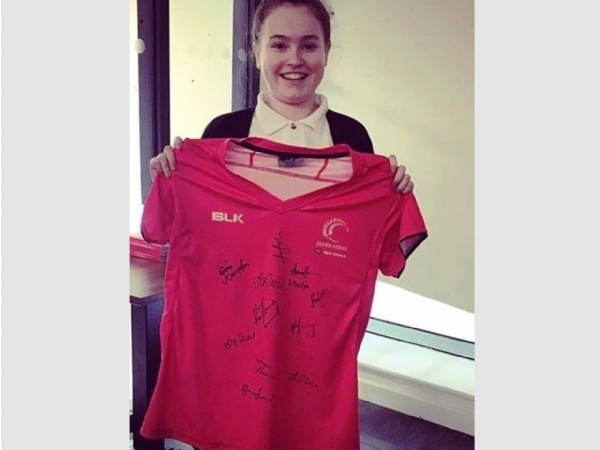 With great excitement, I stepped onto the bus that was going to take myself and my school netball team to meet The Silver Ferns!
The Silver Ferns are a prestigious Netball team who are currently placed 2nd in the World and amazingly, I had a chance to meet them in person.
After the short bus journey to Cardiff, all ten of our year 7 Netball team, including me, excitedly stepped off the bus and entered the door leading to the entrance. We made our way upstairs, to where all the other five schools were eagerly waiting to meet The Silver Ferns.
Our school took a seat in the waiting room, when a man entered and told us all that to begin we were going to have a tour of the Netball arena. He also told us that there was going to be a competition for two of the best questions asked. As part of the tour, we saw The Silver Ferns’ and Wales’ changing rooms, ice baths and the Netball court on which they compete. After the tour, we headed back to the waiting room and The Silver Ferns arrived. I was so excited to see them all and eager to ask them my question.
They all took a seat at the front of the waiting room and introduced themselves. They were all so friendly.  It was time to ask our questions. After a couple of other people had asked their questions, I raised my hand and asked, ‘Why do you think your team is extremely successful across the World?’ One of the members answered me, saying,’ I think the reason we are a successful team is because we all work extremely hard six days a week and we all get on so well with each other.’
After all the questions had been asked, they announced the two winners. The first winner was a pupil from one of the other schools and then to my amazement they called me!  I made my way to the front and collected my signed t-shirt as my prize. It was so exciting! Five minutes later, it was autograph and photograph time. I managed to get all my photographs and autographs in time.