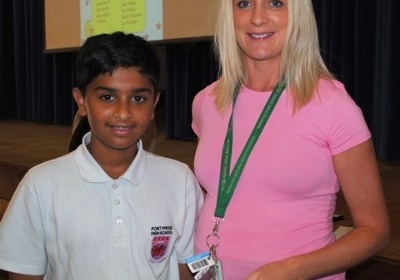 Year 7 and 8 pupils celebrated their academic achievements in their end of year assembly this week.

Year 7 and 8 pupils celebrated their academic achievements in their end of year assembly this week. Pupils were recognised for their high standards of effort, classwork and homework throughout the school year. Each term the pupils receive an up to date school report which shows them how well they are performing in each subject. Many pupils in Year 7 and 8 have continued to produce high quality work and outstanding effort in all of their three school reports. These pupils have been listed on the Academic Role of Honour display which can be seen on the school website in the Key Stage 3 Standards area.