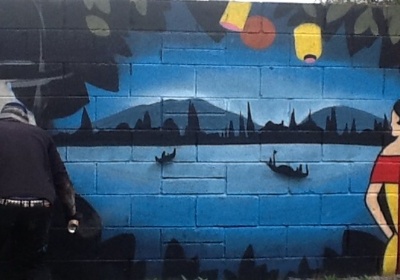 Pupils from 9o have been involved in a fantastic graffiti project

Pupils from 9o have been involved in a fantastic graffiti project organised by RCT Arts council, with the aim of helping to design and decorate the hoardings that will surround the Lido in Ynysangharad Park whilst it is being rebuilt.

They have had several workshops with the Cardiff based Graffiti artist Bryce Davies where pupils came up with water based designs influenced by the 1920’s Art Deco style which reflects that the Lido was originally built in the 1920’s, a time of exciting social change.

Bryce then spent an entire morning with the pupils from 9o showing them how to transform a hideous eye sore of a breeze block wall into a fantastic Art Deco mural.

Pupils had to work in teams and it was hard work, but they did a fabulous job and learned a great deal from the experience.

Since this initial opportunity to work like a graffiti artist a team of pupils from 9o visited Bryce in the park and helped him complete the actual hoardings. It was fantastic to see the designs that all the pupils had worked on in class come together in such a public display. The pupils worked hard on a very hot day!

To see more images from the day please visit our Art Department Gallery.