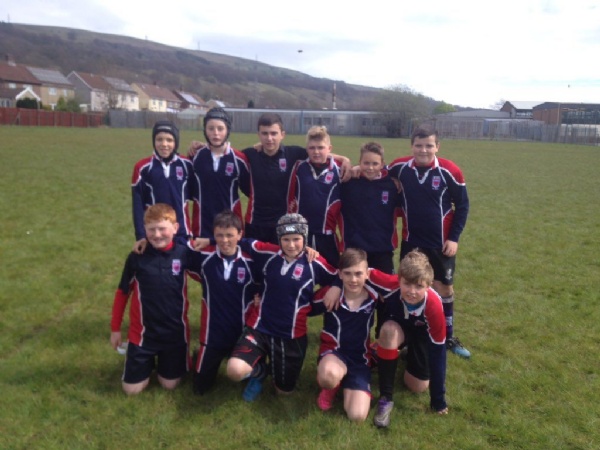 On the day there were two age categories; Year 7 and Year 9. The boys in the squads were:

The format of the day was the same for each age group and the matches lasted 7 minutes in total. Pontypridd High School played the other six teams from the RCT area with results going into a league table and eventually after all the games had been played, the top two teams played each other in a final.

The Year 7 team, managed by Mr. Longden did extremely well in their first ever Rugby 7’s competition. For many this was a completely new experience of rugby and one which they really enjoyed. As with the Year 9, there was some excellent individual skill, along with very good team play. Jarrad Howells scored the try of the tournament after receiving the ball on his own line, sidestepped passed all of the opposition and then ran the length on the pitch to score under the posts. After their six games, the Year 7 team won five and lost one taking them into the final against Garth Olwg. In the final, the boys tried extremely hard but unfortunately the long day and big pitch tired a couple of players and Garth won 24–7.

The Year 9 team, managed by Mr. Dwyer showed a lot of individual and team skill. Many of the district coaches for next year were present and the players did no harm to their chances of making the Dewar shield squad. After their six games, the Year 9 team won four and lost two, finishing 3rd just missing out on the final only on try difference.

Well done to all the boys who represented the school in the tournament. I hope you all have a good rest over the summer and come back energised for our fifteen a side fixtures in September.