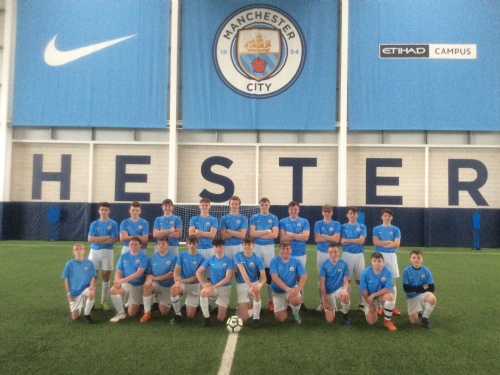 On Saturday 10th and Sunday 11th October twenty pupils and two staff attended a football tour of Manchester City. The trip was a fantastic experience training with the Academy coaches at Manchester City’s training ground, a fully guided stadium tour and tickets to watch Manchester City v Manchester United (The Derby) in the premiere league.

It was an early start on the Saturday departing Pontypridd High School at 07:00 however the boys didn’t mind as they were taken back by the comfy leather seats and charging sockets which lead to a very entertaining sing along on the bus making the four hour journey feel very short. Upon arrival at Manchester City’s training ground we were met by three academy coaches and a security guard. Security was tight as the first team players such as Raheem Sterling and Sergio Aguero were training in the same facility in preparation for their match on Sunday. The first thing the boys were told was that they would be treated exactly the same as all the academy players. In the changing rooms everyone was given their own full Manchester City kit to train in, shirts had to be tucked in at all times and socks pulled up, the coaches were very hot on enforcing high standards from every pupil.

The boys then walked to the £200 million indoor training facility where they received high quality coaching and worked up a fair bit of sweat. On completion of training there was an opportunity for photos before changing and heading over the bridge to the Etihad stadium itself. After a quick look around the mega store picking up some souvenirs we had a fully guided stadium tour. We saw the exclusive tunnel club where season tickets can cost in excess of £15,000, visited the dugout pitch side and got to where the managers sit on match day, had pictures with the man of the match trophy and sat in the press conference room where all interviews take place after the game. The highlight however was the home changing rooms, extremely unique circle shape so everyone can see each other and everyone had pictures under the names of their favourite players. Following the tour it was back to the hotel for food and an early night (for some).

After a full cooked breakfast on the Sunday morning, it was back to training but this time on the outdoor 4G pitch, another fantastic facility and one all the boys made great use of. After training and a show it was match day. We headed over to the fan park where the atmosphere was electric, loads of games that the boys got fully involved in before we headed to the main entrance to watch the players come off the team bus and into the stadium. We took our seats early and so glad we did, three rows back from the touchline, edge of the box directly in front of where Manchester City warmed up. The game kicked off and everyone got into the spirts singing and chanting watching a fantastic game of football. During the second half Aguero scored directly in front of where we were sitting. In the end Manchester City were too strong winning 3 -1. The whole experience was amazing and one which all who went will not forget.

Please click here to visit our gallery for more photos: