UK Secondary School of the Year for supporting pupils with epilepsy.

On Tuesday, 22nd May 2018, Andrea Samuel-Jones (Year 11 Standards’ Manager) and Nathan Griffiths (Senior First Aider) were thrilled and honoured to attend the UK Epilepsy Action Awards on behalf of the school.

The awards were held in the Civic Hall in Leeds and they were there to receive the amazing recognition for being unanimously voted as the UK Secondary School of the Year for supporting pupils with epilepsy.

Our nomination had been made by Kathryn and Jason Favell whose amazing and extremely courageous daughter, Sophia is in year 11.

Sophia's mum Kathryn Favell quoted: "Sophia has frequently been in hospital, but her teachers have always sent work home for her. They have also been able to provide tailored work packages to ensure that she would not miss out on any of her lessons. As well as supporting Sophia, the school has held fundraising events on Purple Day." She added that the family was delighted to honour the staff at Pontypridd High School. "To have these incredible people go out of their way to help someone like Sophia is mind-blowing. I could not ask for better teachers, role models or friends who have guided her to achieving her goal of attending college in September."

Mrs Samuel-Jones made a speech to all the award winners at the celebration and shared messages from Pontypridd High School’s members of staff. She was so incredibly proud to share how all members of staff, without exception, agree that Sophia is our hero. She shared that Mrs Dober, our Assistant Head Teacher had commented that she was always very impressed with Sophia’s maturity and the fact that she never used her health as an excuse to get out of work. She said that if Sophia was unavoidably absent, she would always catch up and ask for extra work to be sent home. This was reiterated by a quote shared from Mrs Young, our Attendance and Examinations Officer who said that Sophia regularly argues with mum about attending school. She says she must attend school and doesn’t want to miss any time off. Even when she is in hospital, the evening before she still wants to come in the next day and Mrs Young says that certainly shows her commitment to her education.

It was shared that Mr Diehl, our Deputy Head Teacher asked for this message to be shared and Mrs Samuel-Jones was only too proud to do so. He stated:-

We are delighted to receive this award as we see it as an acknowledgement of the value we place on supporting pupils' wellbeing so that any obstacle to education is overcome to ensure academic success. Sophia is a case in point and through working closely with Sophia and her brilliant family we believe that our school motto of 'Learning and Achieving Together' encapsulates our approach to supporting all our students to achieve success, no matter what. The home-school partnership has been so important to Sophia and the amount of communication and co-planning and organisation has been a real strength and shows the enormous value of such a positive and strong relationship between parents, the pupil and the School.

This award is recognition for all the hard work of the many staff and fellow pupils who teach and support Sophia and other pupils who face different barriers they need to overcome. The School community is very proud of the manner in which Sophia has never let her epilepsy affect her in school and how she makes an excellent role model for others - from drive and determination to humility and humour, she is a shining example of what we wish all our pupils to be like. Sophia has done remarkably well in school and her positive outlook never ceases to inspire us and we all want the best for her in her upcoming GCSE exams and beyond.

Mr Cripps’ message was also shared and he said:-

Sophia deserves huge credit for the very mature and positive way in which she has approached both the opportunities and challenges that she has had to confront in her life and in school. She is both humble and determined and a role model for others. The motto on our school badge is ‘Persevere to Succeed.’ Sophia has certainly persevered and she deserves all the success that comes her way. We are very proud of Sophia and also to receive this reward. My thanks to everyone who has made a contribution to the progress Sophia has enjoyed at Pontypridd High.

Mrs Samuel-Jones shared that Nathan Griffiths had commented how even when she was feeling really under the weather and was close to having a seizure, Sophia would always smile and say she was ok. He stated how her mam, Kathryn is amazing and every time he needs to call her out of work, she is always speedy in getting to us. Because of this, Sophia has never had a full seizure in school. Sophia is always aware of her symptoms and was always able to tell us when she was going to have one. He finished by saying she is a remarkable girl who will be sorely missed when she leaves Pontypridd High School.

Mrs Samuel-Jones shared what a humbling experience it was to be representing the school and receiving the award on Pontypridd High School’s behalf. She shared that throughout her 32 years as a teacher, and having worked in several schools, she felt she had never been so fortunate to now be working in a school whose staff consistently go above and beyond for every pupil. She explained how the staff back in Pontypridd had been overjoyed to have won the award but were all in total agreement that it was us, as staff, who should be thanking Sophia for being such a conscientious, courageous and extremely positive role model to everyone. She shared how all of our staff stated that Sophia makes our lives so much easier and we are so enriched for having her with us and we are persistently humbled by her inspirational character.

She dedicated the award to Sophia and her family, mam Kathryn, dad Jason and older sister, Georgia who support Sophia with her seizures on a daily basis. In her speech, she said:-

I personally want to say a massive thank you to Sophia’s family for the way in which they support us and always keep us regularly informed. Their strength and love for one another is so inspiring. Sophia and her family deserve all the recognition for allowing us the privilege to support her through her teenage years and be a part of her amazing journey. She has such an incredible future ahead of her and I personally will miss her so much. She will always have a little place in my heart and her infectious smile will be forever in my memory.

She finished with these final words:-

Sophia, you are such a special young lady and never, ever forget how wonderful you are. You have worked immensely hard to achieve your forthcoming GCSEs and no one deserves success more than you. If I could bottle up your determination to succeed I would have enough to sprinkle over all of year 11 for many years to come.

Always remember my motto - Reach for the Stars!

The stars were certainly shining on Sophia, her family and all the incredibly amazing people who were nominated, had presented and been the extremely worthy recipients of all the awards.

It was an extremely humbling and inspirational experience.

WE ARE DELIGHTED TO BE THIS YEAR’s SECONDARY SCHOOL OF THE YEAR WINNER for UK EPILEPSY ACTION. 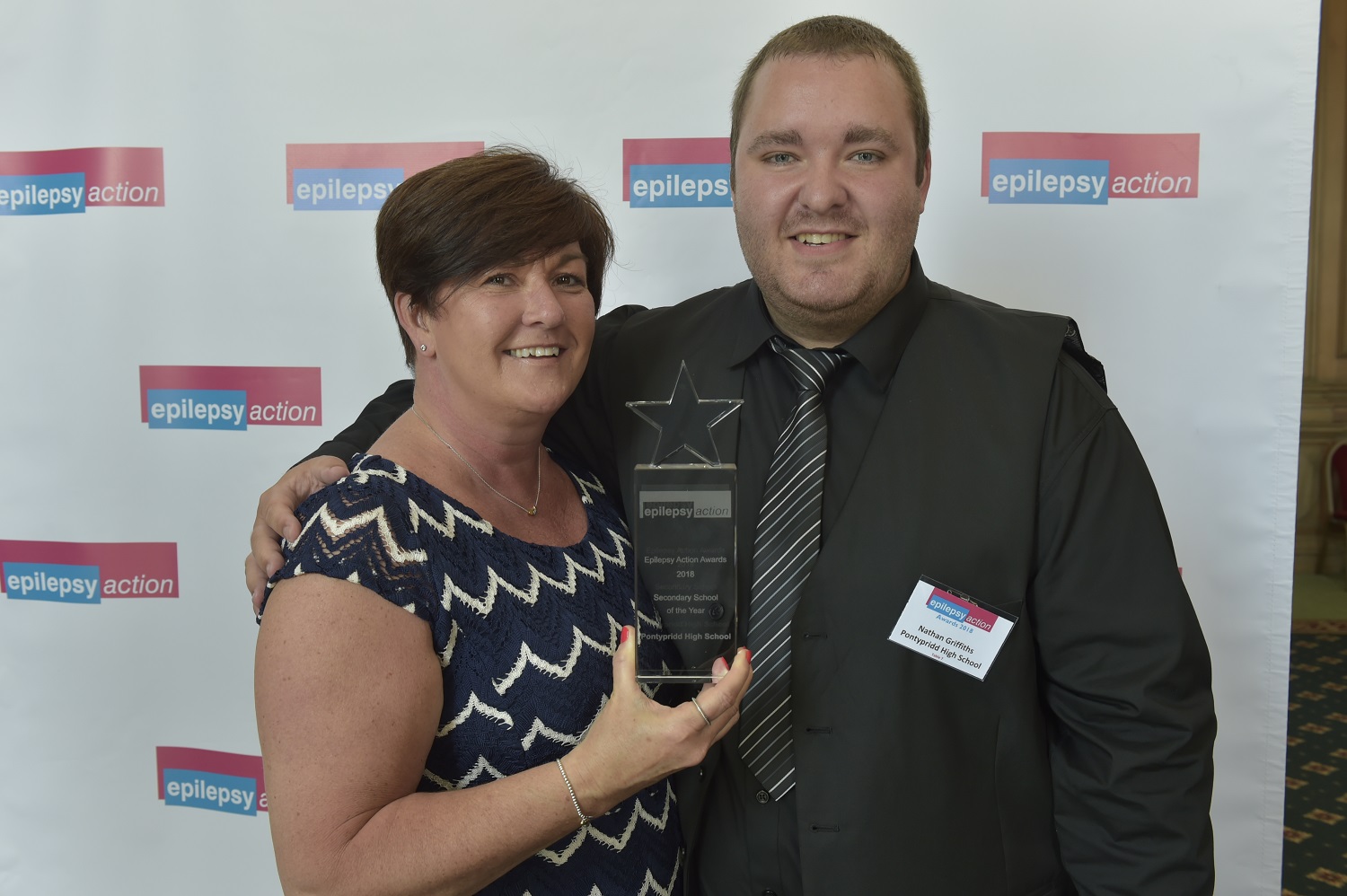 For further information on the awards email epilepsy@epilepsy.org.uk or you can follow the association on twitter @epilepsyaction